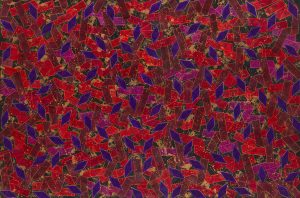 I am passionated by oriental art since my childhood. I have been an artist all my life: draughtsman, painter, sculptor and a calligrapher in Chinese and Japanese scripts. I graduated with highest honours in numerous disciplines (drawing, painting and sculpture) from the Municipal Academy of Bruges and then attended a ten-year course at a Japanese school of calligraphy and ink painting in Brussels (Heian Culture Centre 1995-2005). There I was one of the few westerners to achieve a 5th Dan.

I followed apprenticeships in China (Hangzhou) and Japan. The wealth of knowledge I had amassed is above all self-taught and for many years now I have been intensely occupied not only with practising the art itself but also with studying the underlying texts and philosophy. I write my calligraphy all by myself, wielding a paintbrush on oriental paper and then incorporates them into my work. They are in the main philosophical texts and poetry derived from Chinese and Japanese culture. In so doing, I only use traditional oriental materials. The aim is not to ensure that the texts are always entirely legible – they are, after all, merely fragments.

Favourite techniques: All acquired techniques find each other in my work.

Do you sell: Mostly all my works are for sale. I accept commissions.

Do you teach: After my diploma from the Japanese school, I gave initiation courses for associations and schools. On my own atelier, I gave lessons calligraphy (Chinese characters) and painting for 14 years.

Recommended teachers: My teacher at the calligraphy school, Kyoko Machida, died a few years ago. It is always interesting to study the work of old masters.

The story behind the fragments

This is not the first time that I have used the word ‘fragments’ to refer to my work as an artist. A long time ago, before the end of the last century, I chose it as the title to an exhibition that was held at the Information Centre of the Japanese Embassy in Brussels.

A fragment is a piece of a whole … as is a piece of a puzzle, a shard of pottery, a page in a diary: they are part of something that is (or was) greater than them, of something that contains or encompasses more than they do. A fragment is not complete. But neither is the whole … should pieces break off it and become fragments. Because at that moment what itself was originally a whole, in its turn, becomes a fragment!

In philosophical terms I see all sorts of connections with the way I view the world.

Not only am I merely a fragment of a greater whole, the life I now lead is a fragment, a part of a succession of lives (but how, I wonder, can they succeed one another if the notion of time does not exist outside the earth?); and so, too, the place where I lead that life is no more than a minute point in space, while the fact that this time I’m a woman is likewise merely a facet of humanity. I could dwell on the subject at length but by now you have probably got my drift. I have to accept that it is impossible within the confines of my earthly being to form a whole, just as I have to accept that a work of art is incapable of being all-encompassing.

I can offer no evidence of the lives that I have lived in Asia. But then, I don’t need to: it is obvious. Those lives have ‘imbued’ the life I lead at the moment. Imbued, no more, no less. Since childhood I had difficulty in adjusting to my environment and to the way of thinking of the western world, while at the same time, whenever I encountered them, I was drawn as by a magnet to the images, music, books and art of China and Japan.  A childhood memory: several years ago, after the death of my parents, I found in the house where we lived a pocket book which I must have bought with the small amount of money my parents were able to give us: a booklet on the Japanese artist Hiroshige. I was barely fourteen at the time!

That said, I have always been an ‘inward-looking’ person. I’m always asking questions, always searching, always wanting to understand better the mysteries of life, constantly endeavouring to piece together the bits of the puzzle and permanently on a quest for spiritual growth. That is a compulsion for me – just as being creative is a compulsion – an inner thirst that can be quenched only for a while.

I endeavour to gratify this inner compulsion by remaining, while I work, open to what is greater, more encompassing, open to that of which I am but a fragment. And that sometimes leads to things that I absolutely did not want nor expect, and that sometimes even repelled me but which were so obvious that I felt them throughout my entire body. And that is something which I cannot, nor want to fight against, regardless of the social or financial consequences.

Now more specifically about the Fragments.

These works were created (starting in August 2014) on old canvasses (20/25 years old), my erstwhile unfinished attempts at oil painting. In some cases I no longer remember what was on them because all those years back I painted over them. On those old foundations, those bases, new works were born (each naturally, in its turn, a fragment). They consist of snippets of Chinese and Japanese calligraphic scripts, exercises performed during my ten years of training at the Heian Culture Centre, as well as copies of texts written by old masters, odes to nature, philosophical texts etc. that I calligraphed using a paintbrush on Japanese paper, then coloured, tore up and stuck (using traditional techniques) onto those old canvasses, onto which I also stuck other scripts. The texts are presented in various calligraphic styles, the principal ones being standard, medium-cursive, cursive and sigillary.

The fragments symbolise passages from various lives, successive phases in this life, in an endeavour to bring together their different strands.

For ten years I trained at the Heian Culture Centre in Brussels (a branch of the Kampo Harada College in Kyoto). And because I was allowed to pose few if any questions about the origins or evolution of the scripts, I set about doing my own research, often wondering why and what drove me to it. The impulse to do so nevertheless sustained my perseverance throughout the years and provided me with something worth doing during the many hours I spent on the train. Anyway, I am a seeker and I always manage to find something that needs to be researched!

The materials I use are of first class quality. The inks are indelible. They are ink-bars – pure pigment – which the calligrapher has rub against an ink-stone. It is a time-consuming activity but it enables the calligrapher/painter to calm his soul before commencing work. 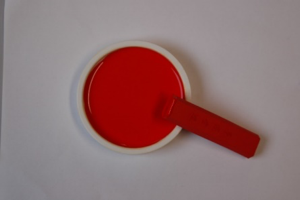 As regards the texts, the aim is not that they should be entirely legible. Being torn and worked, they too become particles, pieces of a puzzle, fragments of something that once existed as a “whole”.

Here and there red stamps are to be found on the texts. They are my signature.

Behind all that lies concealed the idea of an ode to the solidarity that binds the fragments, a solidarity between cultures, between man and beast, between all that lives in time and space. Not merely an ode, but – far more – a deep inner quest for a life in harmony with all creatures. 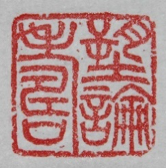