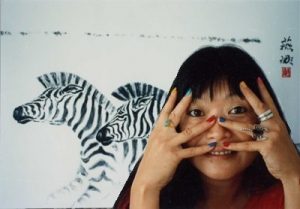 Waina Cheng was born in Lanzhou, China and brought up in Singapore. She began formal training at the age of eight with Chinese master painter Dr Chen Wen Hsi and studied Chinese Calligraphy and Western painting with him for eleven years.
At the age of nineteen she left for England to study at the Oxford Brookes University with the renowned British artist Dr Eric Ennion – who encouraged her to develop her calligraphic style.

From 1968 Waina spent nine years in Africa with her husband Dr Peter Ward, a renowned ornithologist. Together they travelled through Nigeria, Kenya, Tanzania, Uganda and many other countries, camping in the bush and observing the wildlife. This experience of years of sketching the animals in their native habitats is reflected in the accuracy and detail throughout Waina’s work.

Subsequently Waina travelled extensively in Spain, USA, South East Asia, Mexico, Costa Rica, Israel and the Solomon Islands. Having painted the creatures of land and air she then took up scuba diving. This gave her a new range of subjects and perspective which is beautifully captured in paintings such as “Passing Shadow“, “Squid” and “Transparent Drifter“.
In 2000 she was elected a fellow of the Linnean Society.

Waina now lives in Oxford, England and is officially retired but is sometimes available for workshops and has some paintings for sale.

Her passion for painting anything that captured her attention started when she was a little girl – while her sisters were playing indoors she was out looking for creepy crawlies and drawing them.
Through serious study in Chinese and Western techniques, she developed her own perspectives on the natural world and created her unique style of art.
Her Chinese-style paintings are very impressionistic but very accurate at the same time: she selects details of the moods and personalities of the wonderful creatures who share her world and uses white space and selective composition to focus on the characterics she wants to display.

She is very particular about keeping the realism of her subjects, including foliage and other detail from their actual habitats (for example her series of birds portrayed in watercolour, or the suggestions of scenery in her impressionistic Calligraphic art). She firmly believes that a good painting is built and painted with a firm foundation of knowledge, that is, both in technique and study and knowledge of the subjects.

She has kept a variety of unusual pets in her time (including scorpions and snakes) and often sees beauty in subjects that others find less appealing – for example Peace (Crocodile).

Waina is a versatile artist, using many different styles and media and indulging in pottery, jewellery making and clothing design to name a few! The theme running through her work whatever the media used is one of unusual wonder at the natural world, combined with a quirky sense of humour which influences her choice of subjects. Her work reminds us of the beauty of all the creatures of the natural world – even the ones often thought of as dangerous or ugly.